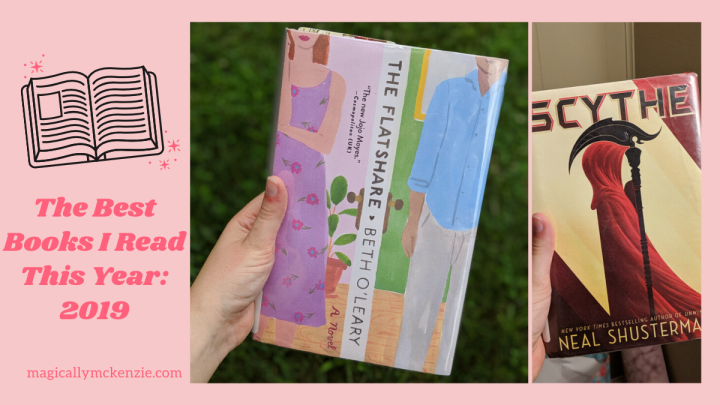 In 2019, my goal was to read 50 books. I kept on track until the end of the year when I had some personal stuff happen, but I still managed to read a total of 42 books. I was stressed at first about not making my goal but my therapist reminded me that reading is supposed to be fun and that if my goal was truly for me, I should be able to forgive myself and move on.

That being said, I did read a lot of really good books this year. I read a few classics, including the longest book I’ve read to date (War and Peace at about 1,200 pages) and according to Goodreads, my average rating was 4 stars. Without further ado, these were my favorite books that I read in 2019:

These two didn’t quite make my top 5 list, but I really enjoyed them so I had to include them on this post. They’re very different from each other, but they both held tight to me for different reasons.

Every Last Word by Tamara Ireland Stone had the best depiction of OCD that I’ve read. The characters were also very strong, and while the plot wasn’t the strongest, I was still invested and wanted to know what would happen next. It was a great character-driven story with great representation of a typically stereotyped mental illness.

Undead Girl Gang by Lily Anderson definitely has one of my favorite covers of the year, but that’s not why I liked it so much. The main character, Mila, is so different from the typical teen narrator, and I loved her voice. I also LOVE the enemies to friends trope, especially when done in such a creative and unique way like this one.

5. The Dreamers by Karen Thompson Walker

This is the type of book that makes me love dystopian/end of the world novels. It’s so unlike what you tend to see on shelves and in movies. The concept was original, and the way the book was organized felt very fresh. It was a super quick read and I’m still thinking about it, 11 months later.

In an isolated college town in the hills of Southern California, a freshman girl stumbles into her dorm room, falls asleep—and doesn’t wake up. She sleeps through the morning, into the evening. Her roommate, Mei, cannot rouse her. Neither can the paramedics who carry her away, nor the perplexed doctors at the hospital. Then a second girl falls asleep, and then another, and panic takes hold of the college and spreads to the town. As the number of cases multiplies, classes are canceled, and stores begin to run out of supplies. A quarantine is established. The National Guard is summoned.
Mei, an outsider in the cliquish hierarchy of dorm life, finds herself thrust together with an eccentric, idealistic classmate. Two visiting professors try to protect their newborn baby as the once-quiet streets descend into chaos. A father succumbs to the illness, leaving his daughters to fend for themselves. And at the hospital, a new life grows within a college girl, unbeknownst to her—even as she sleeps. A psychiatrist, summoned from Los Angeles, attempts to make sense of the illness as it spreads through the town. Those infected are displaying unusual levels of brain activity, more than has ever been recorded. They are dreaming heightened dreams—but of what?

For someone who doesn’t tend to read a ton of dystopian novels, I really liked the ones I did read this past year. This book was thick, but so much happened throughout that I was perfectly content with reading for days on end. It made me feel conflicted on who I was routing for, which made it a great read. I just bought the sequel and I can’t wait to see what happens next!

A world with no hunger, no disease, no war, no misery. Humanity has conquered all those things, and has even conquered death. Now scythes are the only ones who can end life—and they are commanded to do so, in order to keep the size of the population under control.

Citra and Rowan are chosen to apprentice to a scythe—a role that neither wants. These teens must master the “art” of taking life, knowing that the consequence of failure could mean losing their own.

3. Always Never Yours by Emily Wibberley and Austin Siegemund-Broka

This was one of the first books I read in 2019 and I loved it so much. This writer-duo has already found its way to my top favorite writers list and they have a new book coming out in 2020 and I am pumped! This novel was such a refreshing read. An original female character who is a flirt but isn’t surrounded by slut-shaming? Theater nerd but not in a cliche/cringey way? Takes place in the PNW? Shakespeare references, but once again, not cliche or cringey? Check, check, check, check! But really, I think this book was everything I’ve ever wanted in a contemporary YA romance.

Seventeen-year-old Megan Harper is about due for her next sweeping romance. It’s inevitable—each of her relationships starts with the perfect guy and ends with him falling in love . . . with someone else. But instead of feeling sorry for herself, Megan focuses on pursuing her next fling, directing theater, and fulfilling her dream college’s acting requirement in the smallest role possible.

So when she’s cast as Juliet (yes, that Juliet) in her high school’s production, it’s a complete nightmare. Megan’s not an actress, and she’s used to being upstaged—both in and out of the theater. In fact, with her mom off in Texas and her dad remarried and on to baby #2 with his new wife, Megan worries that, just like her exes, her family is moving on without her.

Then she meets Owen Okita, an aspiring playwright inspired by Rosaline from Shakespeare’s R+J. A character who, like Megan, knows a thing or two about short-lived relationships. Megan agrees to help Owen with his play in exchange for help catching the eye of a sexy stagehand/potential new boyfriend. Yet Megan finds herself growing closer to Owen, and wonders if he could be the Romeo she never expected.

2. The Loneliest Girl in the Universe by Lauren James

This is a book that makes me wish that I was a sci-fi writer.

The story takes place in space, and only has one character until the end. I was on the edge of my seat through the whole thing, and OH my goodness it gets intense. I’m not much of a space-setting reader but this might have changed that. I need more books like this, please. (Okay, but no, I really want to write something like this but know nothing about space. Maybe one day.)

Can you fall in love with someone you’ve never met, never even spoken to – someone who is light years away?

Romy Silvers is the only surviving crew-member of a spaceship travelling to a new planet, on a mission to establish a second home for humanity amongst the stars. Alone in space, she is the loneliest girl in the universe until she hears about a new ship which has launched from Earth – with a single passenger on board. A boy called J.

Their only communication with each other is via email – and due to the distance between them, their messages take months to transmit across space. And yet Romy finds herself falling in love.

But what does Romy really know about J? And what do the mysterious messages which have started arriving from Earth really mean?

Sometimes, there’s something worse than being alone…

This was my first taste of listening to an audiobook and I loved it. Yes, it may have given me unrealistic expectations for all other audiobooks that followed, but it was really good. The novel is written as a series of interviews that come together and tell a story. For the audiobook, there’s a different person narrating each character, so it really feels like people are telling you their story. At times I forgot these weren’t real people and that this isn’t a real story- I got really into it. In reviews I’ve read, it seems like the audiobook experience makes the novel better than actually reading it, I think due to formatting and styles. Either way, I really enjoyed listening to this novel.

Everyone knows Daisy Jones & The Six: The band’s album Aurora came to define the rock ‘n’ roll era of the late seventies, and an entire generation of girls wanted to grow up to be Daisy. But no one knows the reason behind the group’s split on the night of their final concert at Chicago Stadium on July 12, 1979 . . . until now.

Daisy is a girl coming of age in L.A. in the late sixties, sneaking into clubs on the Sunset Strip, sleeping with rock stars, and dreaming of singing at the Whisky a Go Go. The sex and drugs are thrilling, but it’s the rock ‘n’ roll she loves most. By the time she’s twenty, her voice is getting noticed, and she has the kind of heedless beauty that makes people do crazy things.

Also getting noticed is The Six, a band led by the brooding Billy Dunne. On the eve of their first tour, his girlfriend Camila finds out she’s pregnant, and with the pressure of impending fatherhood and fame, Billy goes a little wild on the road.

Daisy and Billy cross paths when a producer realizes that the key to supercharged success is to put the two together. What happens next will become the stuff of legend.

The making of that legend is chronicled in this riveting and unforgettable novel, written as an oral history of one of the biggest bands of the seventies. Taylor Jenkins Reid is a talented writer who takes her work to a new level with Daisy Jones & The Six, brilliantly capturing a place and time in an utterly distinctive voice.

My favorite book of 2019: The Flatshare by Beth O’Leary

This. Book. Oh my goodness. From the halfway point until the end, I think I was swooning the entire time. I love the characters and I think this novel may contain one of my favorite ships of all time. I was actually physically smiling while reading this. I could go on and on but I really think you should just read it yourself.

Trigger warning: One of the main characters experienced tons of gaslighting in a previous toxic relationship.

Tiffy Moore needs a cheap flat, and fast. Leon Twomey works nights and needs cash. Their friends think they’re crazy, but it’s the perfect solution: Leon occupies the one-bed flat while Tiffy’s at work in the day, and she has the run of the place the rest of the time.

But with obsessive ex-boyfriends, demanding clients at work, wrongly imprisoned brothers and, of course, the fact that they still haven’t met yet, they’re about to discover that if you want the perfect home you need to throw the rulebook out the window…

I read so many wonderful books in 2019. I learned many things, stepped out of my comfort zone and covered some new genres, and explored minority authors and characters. It was SUCH a good reading year, and I’m honestly proud of myself for getting through so much, even though I didn’t quite reach my goal. There’s always next year!

Feel free to add me on Goodreads to keep up with the exciting stories I’m reading in 2020!