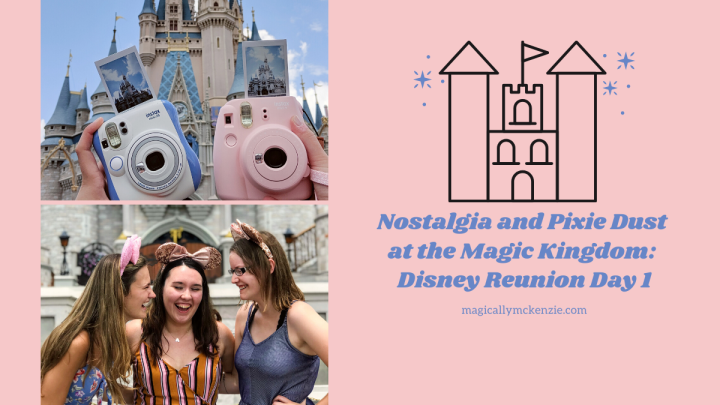 Two years ago, I moved to Disney World for five months for the Disney College Program. I haven’t been back to Orlando since my program ended in January 2018, and after being able to go to the parks whenever I wanted for so long, I’ve had major withdrawals. This month, I finally had the chance to make it back to Orlando with two of my roommates from the program, and it was such a fun trip!

We arrived in the afternoon on Saturday, August 10. After meeting up at our Airbnb for the weekend, we took an Uber to Disney Springs. We ate yummy food, checked out new WDW merch, washed our hands at Basin, and danced our hearts out at the DescenDANCE party. We got a few snacks at our old grocery store (Walmart) then went to bed, ready to have a MAGICAL next day.

Early Sunday morning, we headed to the one and only Magic Kingdom! Every single part of the TTC was nostalgic, and we were so excited to see Monorail Silver pull up to transport us to the Castle.

Main Street USA was as beautiful as ever. I got a little teary-eyed seeing Cinderella Castle waiting for us at the end. After so long… I was finally home.

We headed to the Castle Stage for the Welcome Show, and shouted “Bippity boppity boo!” with the Fairy Godmother to officially open the park! Then we headed straight to Princess Fairytale Hall, because in the morning there is always a MINIMAL wait. We stood in line for approximately 20 seconds before being ushered in to meet Rapunzel and Tiana. They were both so sweet! Tiana couldn’t get over how tall Shane was- she kept saying she’d have to introduce him to Louis because they were probably the same height.

Next, we HAD to get pixie dusted of course!! We went to Castle Couture, which we soon learned was now connected to the Bippity Boppity Boutique, and no longer just a normal store we could go into. RIP my DCP heart. Instead, we went into Sir Mickey’s, where I spent may days, and got pixie dusted there! I had to see my friend Princess Minnie while we were in my old store (and managed not to cry).

Next, we rode our first ride of the day: The Many Adventures of Winnie the Pooh! It was cute as always, and then I saw the store I had a love/hate relationship with during my program (Hundred Acre Goods). It looked exactly the same, which made my heart happy. Then we rode the Tea Cups, and decided to meet some more characters in Storybook Circus! We were first in line to meet Goofy and Donald for the day, which was super exciting. I got to tell Donald that he’s number 1, and he was so happy.

Then we swung back around to meet Daisy and Pluto! When Daisy saw our Celebrating buttons, we told her we were celebrating our DCP Reunion. She was SO EXCITED and had to give us all a group hug. Then she posed us for a great picture. It was so fun! When Pluto had a wardrobe malfunction (his hat fell off because he was hugging me so hard), we got to talking to the character attendant and he told us it made him so happy seeing that we were reuniting. He said he was at the end of his program and was getting super emotional about it, but seeing us lifted his spirit. He was SUCH a sweet guy, Chey may have cried while we talked to him. We love Disney magic.

We checked out the wait times for a few rides and decided to head to the Little Mermaid ride. We got stopped for a few minutes almost as soon as the ride started, but we were soon off again and went under the sea! Then we met Pooh and Tigger. Pooh was sweet and gentle as ever, and Tigger was a bundle of energy.

The sun was really blazing by then, so we took a break from the heat in Cosmic rays. We charged up our phones, filled up our bellies, and found motivation to keep moving forward. I had to see one of my favorite places on property (the Tangled bathrooms), so we went there next. Then we had a Fastpass for the Haunted Mansion, where they unfortunatley denied our applications to be the 1000th Happy Haunt. Pirates of the Caribbean had a 30 minute wait, so we cut through Frontierland to see the new BA Red-Head pirate. On our way out of Adventureland, we stopped to explore the Swiss Family Treehouse.

Next it was time for our photoshoot in front of the Castle! We were lucky that there wasn’t a huge crowd when we decided to take pictures and got some pretty good ones!

While waiting for Mickey’s Royal Friendship Faire, we met a family who’s daughter was checking into her DCP the next day. We talked to them about memories and what to expect, and it was low-key emotional. It also helped us forget about the heat while we waited for the show.

Mickey’s Royal Friendship Faire was perfect, and Chey, Lauren and I proudly sang along. I’m pretty sure this is when I got the sunburn on my shoulders, it was so dang hot. Worth it, though, if you ask me.

Then it was time for another show: Festival of Fantasy! We went toward Frontierland to find a good spot, but we were all miserable and dying of thirst so we split up trying to find some water. I couldn’t find a drinking fountain to fill up my bottle, so Shane and I ducked into Pecos Bill to ask for some cups of ice water. We asked for four and each drank two, sucking on ice the whole duration of the parade. It helped some, but the 97 degree temperature with close to 100% humidity was taking it’s toll on us.

Oddly, Festival of Fantasy started 10 minutes early and was missing a couple floats. They had our favorites, though, and it was a decent distraction from the sun. We sang and danced along, smiling wide.

After the parade, we spent a good amount of time hiding from the heat. We watched Walt Disney’s Enchanted Tiki room, then the Country Bear Jamboree before heading across the park to Carousel of Progress and Monsters Inc Laugh Floor. My love for Carousel keeps on spinning no matter how far away I am. I’m also obsessed with Monsters Inc and I wish I could spend one day just doing it over and over again. (Also, I think we rode Big Thunder Mountain at some point here, but I honestly can’t remember when. All I know is that it was super fun and God bless Fastpasses)

Chey was having major issues with the heat, so we split up so that she and Levi could go to first aid. There was one specific spot I wanted a picture, so Shane and I went to the side of the Castle and I made him be my photographer for a minute. Thankful for my Instagram husband ❤

Then Shane and I met up with Lauren and Landon so that we could do Mickey’s Philharmagic. I know I say COP is my favorite attraction at Magic Kingdom, but honestly, I think this one is right up there in the number one spot. Maybe it’s my love for Donald or the ridiculousness of his adventures or the music or the 4D, or maybe it’s all of it together. All I know is, I had a huge smile on my face the ENTIRE time. I love this attraction with my whole heart (not to mention I worked in the gift shop most of my program).

Shane, Chey, Levi and I had a Fastpass for Splash Mountain, so we separated from Lauren and Landon to meet up with the other two! On our way back to Main Street, I made Shane swing by the Purple Wall because I hadn’t seen it in it’s new form yet! I gotta admit, I do like the new geometric pattern, and we even had to fight with other girls for a good photo spot along the wall.

Then we rode Splash Mountain! The drop was surprisingly steep and we got super wet- the heat had subsided from earlier, but it still felt nice to cool off.

It was getting closer to dark, so we decided to find a place to watch Happily Ever After. As soon as I sat down in front of the Castle, I decided I did not want to stand up the rest of the day. My legs were dying, and I even laid down on the ground for a few minutes. Chey and Levi left to get food, and Lauren and Landon got some Tangled Lantern photos while Shane and I held down the fort. Almost as soon as everyone else joined us, we were forced to stand up and fill in all available space around us. The crowd during fireworks always makes me super anxious, but I was excited to see the show. It was starting to sprinkle (after a chance of rain all day), but it storms stayed away. The water was super refreshing and chased away all remaining sun-blazed heat.

Happily Ever After was beautiful. I sang along the whole time and teared up during the “Brave” part for some reason (usually it’s Moana and the ending that get me). I truly miss hearing that soundtrack every night at work and being able to see the fireworks 2-3 nights a week. My heart hurts.

Chey wanted to stay and watch Once Upon a Time, but Shane, Lauren, Landon and I wanted to ride a few more rides (we had 30 minutes until the park closed) so we split up again and headed into Tomorrowland. Buzz Lightyear Astroblasters had a short wait, so we rode it together! I’m genuinely convinced Shane and my car was broken because he beat me by like half a million points. He isn’t THAT good.

Then we rode the Peoplemover, which was the perfect way to end the night. It’s so relaxing and such a good way to see the land and the Castle. I miss everything about living there.

By the time we left the park, getting back to the TTC wasn’t too stressful. We got an Uber and headed back to the Airbnb, exhausted and sunburnt but smiling and still covered in Pixie Dust.

Our day at Epcot will be posted soon… stay tuned!