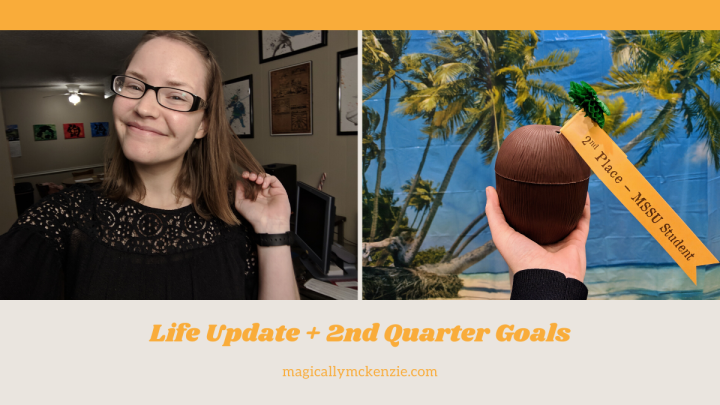 At the beginning of the year, I made some overall goals for 2019. Instead of doing “New Years Resolutions”, though, I decided to set quarterly goals to keep myself more accountable. These quarterly goals were more achievable things I aimed to accomplish in three months, which made me more likely to get them done.

I’m proud to say that I reached most of my goals for the first quarter! They were short-term and specific enough that I was able to make active steps to accomplish them, rather than having broad things I wanted to accomplish by the end of the year. My first quarter goals for January-March were:

I also did a bunch of other exciting things the past three months that might not have been “goals”, but that I consider accomplishments nonetheless:

I traveled quite a bit! I finished up my trip in North Carolina and Atlanta, GA, saw my friend get married in Miami, spent a weekend in Chicago, and went to a convention in St. Louis!

I continued to work on my novel, even though I’ve fallen very behind on the goals I set for myself (okay, two weeks, which isn’t bad, but it’s frustrating to me). I’m still working on it, and am excited to see where it goes the rest of this year!

I got to hang out with friends a lot, which is always super nice and fun. Bowling, Orange Leaf (where we had an amazing Jenga battle), Super Smash Bros- it’s always a party.

I decided to take out my septum piercing and grow out my bangs in the span of a few days. I basically did a 360 and changed my whole appearance again, so yay for that.

Kind of going along with one of my goals to join a new club on campus, I’ve been more active in the English department, which has been a ton a fun! I read aloud one of my short stories, which was published in MSSU’s literary magazine bordertown, got 2nd place in a short story contest, and like I said before, went to a Sigma Tau Delta convention and was elected Secretary for the coming school year!

I watched some awesome movies over the past few months, my favorites being Captain Marvel (YES, I loved it and felt the immediate girl power radiating through me), Bohemian Rhapsody, and Instant Family (where I cried literally through the entire thing). I also binged-watched some Netflix shows- Fuller House, Workin’ Moms, and Tidying up with Marie Kondo. Shane and I finally finished all ten seasons of Friends, which we’ve been working on since last semester.

I’m proud I was able to accomplish so many goals that I set for myself, even though I struggled a lot mentally this quarter.

As I go into the second quarter for 2019, I’ve set a few more goals for myself to achieve in April-June: