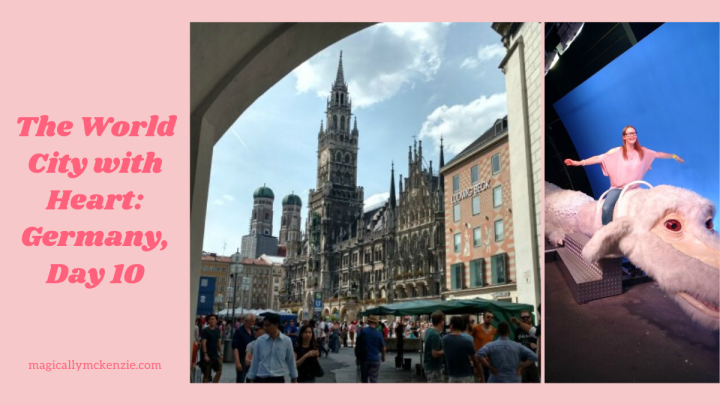 On Saturday morning, we all dragged ourselves out of bed, exhausted from spending the previous day in a new city, then walked to the bus stop ready to do it all over again! We left Ansbach at 8:30 and headed to Munich, Germany’s capital. It was a long bus drive, but we made a couple stops to stretch our legs (where we had to pay to go the bathroom) and I talked to MaKenzi for a long part of the ride, so it went by pretty quickly!

Since all of the summer school students were going on this excursion (instead of just a couple classes that went on yesterday’s), we had three choices for what we wanted to do that afternoon. I chose to visit the Bavaria Film Studios, which was the last group to get dropped off. We said goodbye to the students who got off the bus to tour a soccer stadium, then looked at the beautiful BMW Museum as we drove away after dropping those students off. We finally got to the Studios, and I was so excited- I had heard a lot of good things about this place. We had a ten minute break before our tour started, so Mar and I quickly went to the McDonalds that was on property and finally tried their veggie burger. Now, if you know me, you know I really don’t like McDonalds, and even before I was a vegetarian I wouldn’t eat their burgers. However, I took one bite of the veggie burger and fell in love. It was so delicious, and Mar and I couldn’t get over it!

The first stop on our tour of the lot was a 4D ride! We sat in what looked like a movie theatre and put on our 3D glasses, but then a bar came down over us. The movie that played was about a cowboy and a horse (who reminded me of Maximus from Tangled) chasing down a thief through a mine, waterfall, and more! The seats moved and bumped up and down and it felt like we were in a runaway mine train car like the other characters. At one point, we even felt water on us like we had really just fallen down a waterfall. It was so cool and it reminded me of Star Tours at Disneyland, the way it put you in the video.

Then we began the official studio tour! We went through a bunch of sets from German movies and saw real props. I didn’t know many of the movies, but it was still really cool to hear about the things people have to go through to get the perfect shots for a movie. I got to act out a scene in front of a green screen with Mar and Janita, we went inside a submarine that was made for a movie based on a true story, watched Jillian give a weather report, and even flew on Falkor from The Never Ending Story! I loved it all and I had a blast, even though, once again, I didn’t know most of the movies. I really want to go watch them now! If I can find an English version of course!

At the end of it, we made a “movie” on a train car and our tour guide moved the camera to look like the “actors” were actually on a moving train! After the tour, we had time to explore the gift shop! Even though Star Wars was filmed in England, they still had a bunch of Star Wars stuff and I wanted it all. They also had Poe from Kung Fu Panda and he looked so derpy, me and a couple other girls laughed about it for a few minutes. I bought a small Pascal since Tangled takes place in Germany (and it’s my favorite) and a little post card! I had a German translate it for me so I wasn’t just buying something blindly XD (The guy is asking who wants the dark side of the meat and Darth Vadar says that he wants it)

Then we all loaded up on the bus and headed to the Munich city center! It was so breathtaking; I couldn’t stop staring out the window. We were given some free time to walk around, so Deshayne, Shelby and I set out to explore some! I was basically a heart-eye emoji walking around the city. The sights, the sounds, everything was full of life and stunning. We walked through a tunnel at one point and there was a guy playing the violin. The way it echoed off the walls with the view of a huge church on the other side of the tunnel… I wish I could capture what the moment was truly like.

The three of us walked around for over an hour, stopping and watching multiple street performers, going in a couple stores, following the sight of a tall tower, and once again searching for a free bathroom. We rode up and down many escalators (some of the stores were 4-5 stories tall??) and eventually made our way back to our group’s meeting place!

We all walked to the restaurant we were eating at for our last big meal in Germany! We sat in two long tables for our final meal together, eating and talking. I ordered spätzle once again, and it was really good. There was even a couple in the room playing German music! It sucked that we had to pay so much money for a glass of water, though.

We left Munich by 8 and the real party began on the bus ride home! Amine was trying to give Deshayne flirting lessons and teach her how to wink, it was hilarious. I got to spend some time talking to Mar, which was really nice, and a bunch of people took turns going to the front of the bus and singing a song into the microphone. They were singing their national anthems and other random stuff, it was so funny. Once the bus quieted down, I fell asleep for a little bit. Our last few hours together as a group was a blast and I already miss everyone so much.

Once we got back to the hotel, Shelby and I packed our stuff up so we didn’t have to get up early in the morning! We couldn’t believe it was already our last night in the hotel, and the morning would be our last breakfast there. It all went by so fast and it was bittersweet to think we’d be heading home soon. But our adventures in Germany weren’t over yet, and the next couple days were definitely an adventure.